Skip to navigation | Skip to content | Skip to footer

Follow our blog to keep up-to-date with the most recent industry news & updates. Alternatively, you can browse our archive below.

Kanban is nowadays a well-known concept, originally developed by the Japanese in the 1950’s for moving items in manufacturing through a series of stages or process steps, but having complete visibility of what items were needed in each stage. The key was and is visibility.

Kanban literally means signboard or billboard in Japanese. In the West, this concept was widely adopted in Europe during the 1970’s and 1980’s by many manufacturers.

This Kanban concept has in the last few years been widely adopted by Customer Relationship Management applications, particularly for sales Opportunity Management, but also elsewhere including Project management. 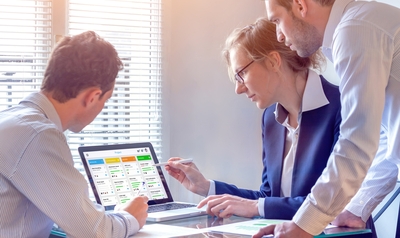 Kanban’s biggest benefit is it provides a clear visual presentation of what “stage” of your opportunity process you are and so this concept has been applied by a number of vendors with the first software application vendor using this I came across being Pipeliner CRM, which used this view as key differentiator to highlight their very visual representation of data and this was back in 2014.

For CRM apps, the most common use of Kanban visualisation is still in helping to manage Sales Opportunities (although it is widely used for Cases and Activities) but my focus in this post is purely on managing the Sales Pipeline. In hindsight, a weakness of many CRM systems at that time was that to view your opportunities you really could only do this in two ways:

• Looking at a long list of the opportunities, possibly sorted or filtered by their stages but still only in a grid format

Of course, you could usually extract and manipulate data to present information differently, but again this was not so easy with the reporting tools of the time, such as the current in-app reporting or even using Crystal Reports, the reporting formats and visuals were limited compared to nowadays with say Power BI reports.

The Kanban view as advocated by Pipeliner CRM back in 2014 meant you had a clear view of all the opportunities in terms of these being able to be grouped visually by their stage and more importantly you could easily ‘drag and drop’ any onto the next stage on the screen. This visual view focussed the mind on how many opportunities were at each stage, whilst adding another filter say by close by date for your next target period could also be used. Later, this was the refined to show your average time in each stage, drop-off ratio and other metrics such as showing your sales velocity (I have covered in a previous post Sales Velocity).

For Sales Reps and Sales Management, knowing where your opportunities are in your sales process and at what stage is critical as many sales people will have 30, 40, 50 or even more opportunities open at any one time to manage and prioritise.

Other vendors took note and whilst I may be wrong which CRM first introduced this*, it wasn’t long before this was being widely introduced.

So why is this Kanban view so useful?

In my view, using Kanban for managing your opportunities offers the following five key benefits:

Visual: The clear, often colourful visual representation of opportunities is easy to absorb compared to the traditional standard List view. You can see the number of opportunities in each sales stage instantly.

Understanding: Reps can instantly understand that all things being equal, they need a balanced pipeline, more at the front of their funnel and so there is likely to be less at the end stages. In addition, it can become quickly apparent which opportunities may be ‘sticking‘ at a stage for example.

Filter capability: In most systems, it is easy to filter say by close by date or other criteria, such as value, again helping Reps to decide on which sales to focus on say this month, this quarter etc.

Drag and Drop. It is easy to update and ‘drag and drop’ selected opportunities into the next stage or even back a stage ensuring for Management a more up to date and possibly more accurate and realistic sales pipeline.

Reporting and Coaching: Sales Management like this view since it can make it easier to see where opportunities may be sticking or needing to be moved along and they can feed this back to a Rep as well since this can be easily communicated in any coaching or review meeting.

There are other reasons, including often the ability to review your Sales Velocity by seeing how many days an opportunity is in a stage against your average for that stage for example, but I covered this concept in my detail in a post a while ago (link), still these are my top 5 benefits.

Talking of the Top 5, let’s review the progress of this adoption amongst my Big Five CRM sales team focused applications:

Kanban has been introduced as part of the new Unified Client interface in 2019 for new clients, whilst existing clients are able to use this as soon as they upgrade to this new ‘look and feel’, although this will be applied globally from 1st December. In my view, this is one of the major reasons for adopting this new interface, not least that it is more attractive and easier to work with. 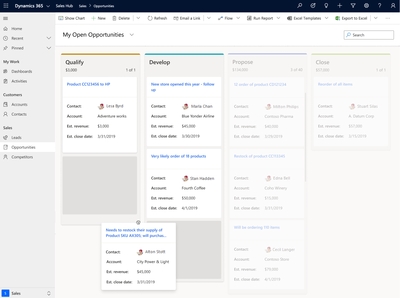 Users can now pin to show the current opportunities key fields and change this as for a quick review as well.

Kanban has been around to my understanding now for over five years, since the introduction of the “Lightning” interface which modernised the look and feel from the traditional “Classic” view which had been around for a number of years. Only available in this new release, the Kanban view was originally known as the “Opportunity Board” before being renamed in Spring’16 release. By now, almost all clients, certainly in the SMB sector will be on this interface, first launched in 2015.

For their Summer’ 20 update Salesforce have announced they will be adding to this so Reps can edit a record’s key fields inline, without leaving their Kanban view. Also, as with Dynamics 365, you will be able to open and close the details panel by clicking without opening full record to show key fields for faster on-the-go update whilst still staying in Kanban context

Primarily a marketing automation provider and market leader in this segment, the company has expanded its offering over the last five years as well and recent reports suggest large numbers of new users for its core CRM have been added over the last few years. As part of this CRM core platform expansion, within the Opportunities or ‘Deals’ view, again Kanban is offered as standard.

Since I first came across the software in 2014, what struck me was its visual focus aimed at the sales team and this is still the apps core niche today. With added functionality and filtering on sales velocity for example, they have now added a Bubble chart view as well, showing opportunities filtered by stage across a timeline of months, quarters etc which is a new and innovative visual presentation of Kanban.

Originally open source and this was widely adopted from around 2009 onwards by SME’s although not something I encounter as much anymore in talking to clients and prospects, again Zoho has adopted the Kanban in its opportunities or ‘Potentials-Opps’ view.

Kanban from the main CRM vendors continues to be developed with additional functionality making this easier for your Users to find, filter and to clearly see their opportunities and more importantly encourage them to take action. The Vendors continue to evolve and improve what is possible to be shown and worked on in their various Kanban-type views, but at heart, the concept remains the same as does the goal of clearly representing key information, so 40 years after it first was adopted, Kanban is very much here to stay in the world of CRM.

*A Note on Dates. Often, the dates of Kanban introduction are based on my own first encounter with functionality by app